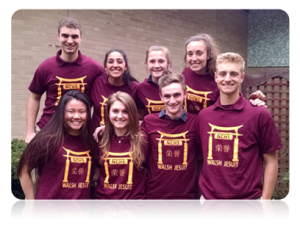 The National Chinese Honor Society’s goal is to encourage its members to become life-long learners to gain a better understanding of Chinese language and culture, and to play an active role as constructive peace-makers in the twenty-first century. The applicant must be a full time high school student who has studied Chinese fo four semesters in high school with an average of A- or higher. A qualified candidate is someone who is willing to work with the sponsor/advisor as well as with other students as a role model to play a positive role in Chinese studies. Hui-ying has continued to develop the Mandarin Language program at Walsh over several years and her efforts are producing some exemplary students. Congratulations to all!